Figured I’d take a break from coding tonight to post an update on roasting curves. They are basically completed, and in the beta-testing stage. Though it’s not ready to release yet, it getting close. I took a slightly different path than the one I originally started out on, but the result is something that I feel is even better than I had anticipated.

Based on the feedback I’ve received, people like the roasting interface.  I struggled to add what, in actuality, is a very complex concept, in a way that is unobtrusive to those that don’t need it. The premise of any good iPhone app is simplicity. Roastmaster is certainly not a simple app, but I’ve tried very hard to keep it looking and feeling as simple as possible. I’ve tried to carry that over into the implementation of roasting curves. Take a look at the progress so far. 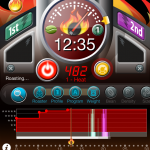 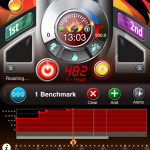 Roasting screen with the gauge in curve entry mode, and graph in benchmark mode 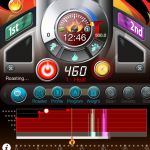 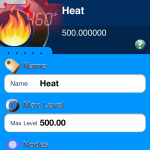 The concepts behind curves are simple…

Hand in hand with the new curves, I’ve beefed up the graph view to support the addition of curves. It’s finally become more what I envisioned when originally designing it. I shared many of your thoughts on the shortcomings of the graph view and set out to fix them on this release.

I’m still a few weeks away from finishing up testing, and final tweaking on roasting curves and benchmark matching. This is my number 1 priority until it’s finished. I need to tie all of this into Roastmaster’s automatic past roast matching algorithms, but I don’t anticipate that being terrible difficult. To those of you waiting… thanks for your patience – I believe it will be soon!!

Also – I want to thank everyone who’s contacted me with kind words, requests and suggestions. I take all of your suggestions to heart. Roasting curves is by far the biggest feature request, so naturally, the one I tackled first. Having access to the database is a close second. I am trying to get that taken care of in the next release as well.

If you use Roastmaster, and like it – please spread the word!