Tonight’s roast is Java Kopi Sunda from the fine folks at Sweet Maria’s. It’s fairly exciting because it’s a new bean for me. I’m anxious to pull a couple of shots tomorrow! But, the excitement doesn’t end there… tonight’s roast is a bit more special – it’s my first roast with the dev version of Roastmaster on the iPad! Now – I know a lot of you are waiting very patiently – it’s not completed yet, but I’m hopeful that a large chunk of the hard work to out of the way.

I have to say, I doubt I’ll ever go back to the iPhone for roasting. If you’re used to Roastmaster on the iPhone or iPod Touch, the best way to describe using it on the iPad is liberating. Liberating and liquid. Navigating the app is incredibly fluid. The extra screen real estate affords a less cluttered interface – and the ability to hone in on the details you are looking for much more easily than the iPhone version. And, pairing it with a bluetooth keyboard… well – it’s heaven for me!

Take a look at the screenshots. I will undoubtedly make a few tweaks – a couple of things are bugging me at the moment, but I’m comfortable enough with them at the moment to share them. The first thing you’ll probably notice is the landscape orientation. This is long overdue, and for the iPad – in my opinion, it’s a necessity. Another difference I was able to work into the iPad version is static headers. Headers are nice – they’re a functional and efficient way to present important information for browsing through records, but on the iPhone it was imperative to get them out of the way via scrolling when it came time to enter data. Not so on the iPad! I played around with a couple of designs – one with scrolling headers like the iPhone, and the version that won hands down – static headers. I’m sure you’ll agree – it’s a great way to have a succinct summary to reference – even when entering data on static screens like beans, blends and cuppings. And for roasts, to be able to have the roasting console front and center while you browse the roast data, well… again, I’m in heaven.

Thanks to all who’ve offered to beta-test. This is new territory for me – I’ve never dealt with public beta-testing for iOS. All of the initial Roastmaster testing was done with devices I had direct access to. I’ll be in touch soon to get the process started. I’ll also post if I end up needing more beta-testers in case anyone is interested. I doubt it at this point – many people have already been in touch, but things can always change.

‘Til then, know that I’ll be working very hard to get the universal version finished up as quickly as possible. 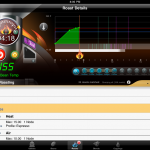 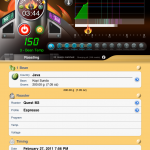