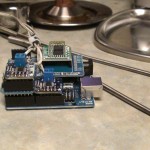 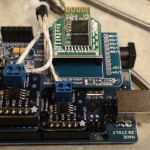 Here it is – what I’ve affectionately dubbed the ThermoTooth 3000 – a fully wireless, dual channel, K style thermocouple prototype. She had her first successful Bluetooth session with my Mac tonight, and even with her limited code, she’s quite a smart gal! Over a simple wireless serial connection via terminal, I am able to select which thermocouple to monitor, and trigger individual Celsius or Fahrenheit readings, or both. No special drivers – just a Bluetooth serial connection.

For the geeks like me, she’s built on an Arduino Uno prototyping controller board. Stacked on top of that is an XBee shield, providing the networking connectivity beyond the basic USB already present on the UNO. The XBee shield currently houses a Seeed Studio Bluetooth Bee, which provides the Bluetooth connection layer. The two K-style thermocouples connect to the Uno via two Max6675 chips, each providing cold-junction compensation and digital conversion of the thermocouple voltages for its independent channel. The sheer amount of electronics here is definitely overkill – I’m sure the cumulative brains of this could drive a car, but that’s how prototyping works.

First off – it’s not meant for live production. I built it in the hopes I could pair it with an iOS device, and negotiate a wireless serial connection via Bluetooth. I know the device functions well, but the external connectivity of iOS itself still holds unknowns for me. The XBee shield offers the advantage of being able to swap a regular wireless network interface for the Bluetooth module in case the Bluetooth method is unsuccessful.

Hopefully, a more permanent solution is on the way. I’ve been contacted by a manufacturer who is currently developing a Bluetooth thermocouple they plan to bring to market this fall. Naturally, this is great news for a lot of us looking for automated readings. They have not discussed the expected price, but the product itself sounds great! The manufacturer has agreed to sending me a prototype for evaluation once the release date gets closer, but in the mean time – I needed something to develop with now.

This is why I built the TT3000. The majority of the code involved to implement thermocouple support will likely be designing the Roastmaster interfaces and its internal data structures, and setting up the communications framework to be used between roasting curves and wireless devices in general. The Bluetooth serial protocol has seemed quite easy to work with while prototyping the TT3000, so I’m hoping that this venture will be successful, and that adding support for the new product (as well as any others that may crop up), will be fairly easy to add ONCE I get support for wireless thermocouples in general built into Roastmaster.

I’ll post back here with updates as development progresses. This isn’t at the absolute top of my development list – there are several feature requests/tweaks I want to finish up first, but I plan to be working on this until I find a workable solution.

As always – if you have any input – please let me know.

Upgrading to Phidgets Lib22 from Lib21